Shadow and I got up at 8 am to a very white, windy world. I went out for a romp in the snow with him first thing but couldn’t stay outside for more than 15 minutes. We walked down to the dock and was surprised at how high the tide was. The lower dock was higher than the upper dock. 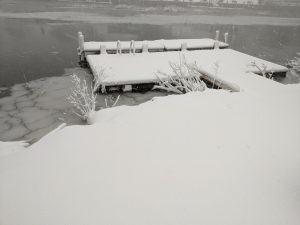 Shadow, he who loves snow, evidently doesn’t love the wind blowing the snow sideways as he wanted back inside as well. Once inside, I turned on the weather channel to see what was happening elsewhere. But not for long. At 8:45 am the power went out just for a few seconds at about the same time the wind really started powering up. The wind kept howling all morning and the snow kept falling and blowing sideways. I didn’t realize how loud the wind was until 1:30 pm when it seemed to instantly calm down while I was eating lunch. One minute the wind was howling, the next it was almost eerily quiet. It was probably still blowing 25 to 35, but that was better than 40 something!

I got power back, lost it again, got it back, and finally lost it for good. It is still off, so I am sitting in the dark except for the light of a little battery-powered lantern. I have been using my propane-powered Mr. Heater all day and it was able to keep the whole cottage temp at 68 F where I normally have the thermostat set. 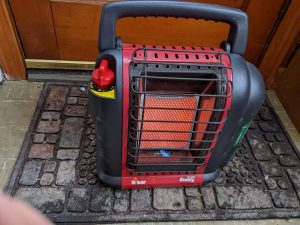 But during the afternoon, I was fully immersed in writing when the heater ran out of fuel and shut off. By the time I noticed, the inside temp had dropped to 64 and it is still there. I will leave the heater on until I go to bed. Then it goes off until morning. I will be warm enough for the night, but it could be quite cold by morning. It is getting down to 11 or 12 degrees F tonight and is forecast to be in the low 20’s tomorrow. Sure hope the power comes back on sooner rather than later.

So I don’t have heat or lights, but both should return when the power is restored. Others are having more serious challenges. Heather and Jed have power coming to the house, but the fluctuations in power yesterday damaged something in the ciricuit board and the electricity in the house is spotty—in some rooms but not others. The mother board in their furnace was also blown out. They are using space heaters in some rooms which keeps them barely warm but not freezing. They were able to get an electrician to come tonight to check things and the furnace folks are coming tomorrow. If parts are available, hopefully they will be back up and running by tomorrow night. But if parts have to be ordered, who knows? As I said to Heather, that is a real pain, but frozen pipes would be worse. I just got an update from them telling me they actually got an electrician to come tonight. At least they have lights and so far, no frozen pipes. Friends Bruce and Jane Wooden are also being challenged to the max with no electricity and a heating system they are trying to keep going with their gasoline generator. The Woodins, the Goldstones, and myself join the masses of others that are struggling to stay warm.

I wanted warm soup for lunch today, but assumed that since I had no power, I couldn’t use my gas stove. For some reason, I thought that the electronically controlled pilot lights couldn’t be lit with a match. That is true for the oven, but when I was talking to Justin this afternoon he told me that a match would do the trick on the stove top burners. He was right, but I had already used a little butane stove Mark and I bought in Thailand to heat the soup for lunch. I have thought about throwing that away many times but was not sure how to get rid of the whole bag of butane cannisters. So, it stayed tucked away in the basement, along with too many other things. I was reminded today of what a good little one-burner stove it is. Glad I didn’t throw that one away!

Shadow and I had two romps in the snow this afternoon, 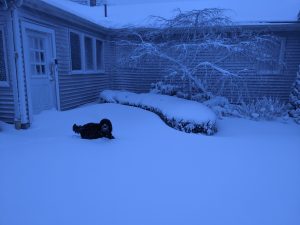 but the last one, just before dark, ended on a scary note. We walked out to the street which has been plowed so the snow was not very deep. But back in the yards, mine and Shirley’s, I measured anywhere from one foot to two feet of snow, not to mention the much deeper drifts in places. Shadow frolicked and seemed to be having fun in the deep snow, but my gloves were wet and my fingers were freezing. 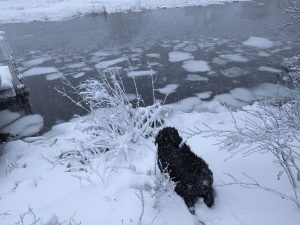 We headed back to the house. He was right beside me, I thought, then all of a sudden he was just gone. I called and called and he didn’t come. I went in to get dry gloves and then went back out to start the hunt. It was then that I saw his little black head hiding behind a bush. He had found a place with very little snow and I guess he had decided that was where he was going to stay. He willingly followed me inside, but by this time it was dark and he obviously doesn’t like that either. I turned on a little battery-powered lantern, but that didn’t help. He just stood beside me and wouldn’t move. It took a while, but I finally got him to lay on his favorite blanket on the sofa. I hope the deep snow and darkness have not permanently traumatized him!

I won’t be able to send this log tonight since I don’t have power or internet. I will send tomorrow and include some photos I took today. I love the photo of my living room window and want to share that. 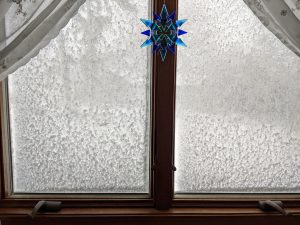 Since mid-morning, I have not been able to see out of it nor the front storm door that is all glass. They are plastered with snow and ice. I feel like I am looking at the world from inside a snow globe that someone just shook really hard. 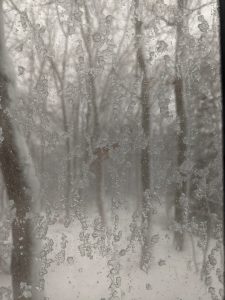 And by this evening, the entire front of the cottage is totally plastered with snow. 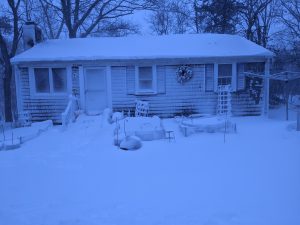 It is going to take a while to dig out of this one. It is beautiful, but I will be glad if this is the last big snow for Cape Cod this winter. This one is going to stay with us for a few days as it is not going to warm up enough to melt anything until later next week. That will give everyone plenty of time to enjoy the snow. Then I’ll start to think spring. I know that is premature, but I can dream.