This morning I drove Jo, Ziggy, and Coco to the airport in Richmond where they got on their Spirit flight to Fort Lauderdale and then on the San Juan. My flight to Boston was supposed to be at 2:30 pm, but there was yet another issue and I ended up on a 7:30 pm flight back to Boston. I dropped Jo, Z, and C off at the airport and drove back to downtown Richmond to check out the city. I drove by the capitol, designed by Thomas Jefferson, 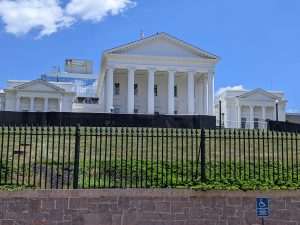 then down to the James River to see a section of the canal system that George Washington had hoped would become a continuous transportation system from the Atlantic Ocean to the Mississippi River. 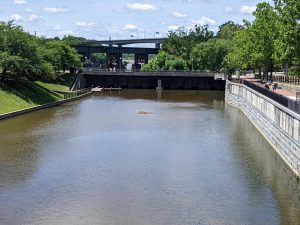 That never materialized as rail transportation took the lead. I walked along the river and came to the Tredegar Iron Works, the biggest ironworks in the Confederacy during the Civil War and one of the main reasons Richmond became the capitol city. 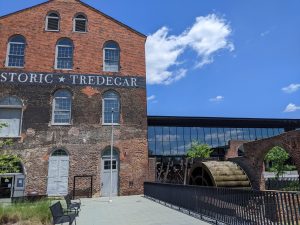 It is now the Civil War Museum. Then I headed back to the airport to take an afternoon nap in the rental van before returning it and heading home. I knew I would be driving home from Boston late at night and thought a nap was the best way to spend my afternoon.

The flight home was without drama with a fiery red sky as we landed in Boston at 9 pm. Nighttime road construction caused the drive to the Cape to take longer than usual, so I didn’t get home until midnight. But I was bright eyed and busy tailed after that two-hour afternoon nap. After a wonderful week in Virginia, it felt good to be home . . . but lonely. I look forward to picking up my Shadow tomorrow morning.