Despite Heather’s bout with Covid and a delayed flight, we made it to Puerto Rico on this Easter Sunday. The timing of Heather’s Covid made the lead up to the trip a little nerve wracking, but miraculously she tested negative yesterday. We flew on Frontier Airlines which was also a little nerve wracking this morning. Just as we got on the road, Heather got an email saying the flight was delayed by two hours. We decided to keep going as the Frontier website continued to say the flight was on time. Then she got another email saying the flight was delayed by only an hour and twenty minutes. When we reached the airport, we parked the van in front of the terminal, left the kids in the van, and Heather, Jed, and I went in to check the luggage and check on the actual flight time. When we told the attendant we planned to leave the airport and come back later for the flight, she warned us that the time might change again. It could be earlier. It seemed no one really knew what time we would depart. We left anyway and took a walk on the East Boston side of the Harborwalk along the water. We parked on the street by a park with soccer fields and a playground and an on ramp to the Harborwalk. 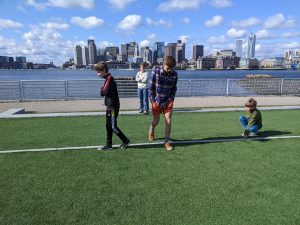 The boys wished they had brought a soccer ball but had to be content watching others play. We were literally blown away in East Boston as the wind was so strong and cold. 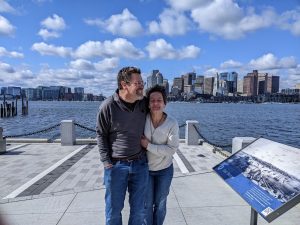 So we quickly returned to the airport to park in the long term parking garage and take the shuttle bus to Terminal E. There was only one restaurant open, so we ate an early lunch and then boarded the flight that was delayed a little more than two hours. Watching the Goldpebbles listening to music with their variety of ear buds and headphones while waiting was quite the picture. 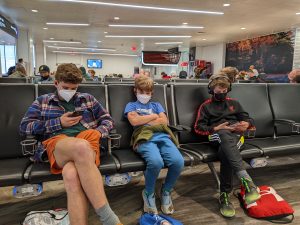 The weather in Puerto Rico was a bit different from the sunny, but chilly Easter morning in Boston. It was hot and sultry, the kind of weather I love. We picked up our bags and our rental van and headed to Rincon. It is a two-and-a-half-hour drive from San Juan to Rincon which seemed like forever after a four-and-a-half-hour plane ride. But it was all worth it when we got to Finca Maravilla and were greeted by Justin, Jo, Ziggy, and Coco. There is nothing so wonderful than having the whole family together. The Easter bunny had left goodies for us and Justin brought the bunnies inside to give us a big Easter welcome. 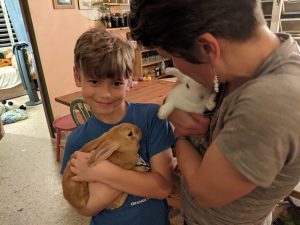 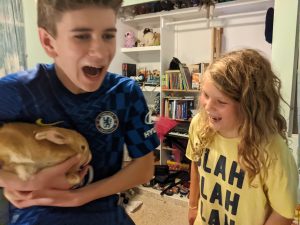 Then it was on to the Airbnb for a midnight swim in the pool. 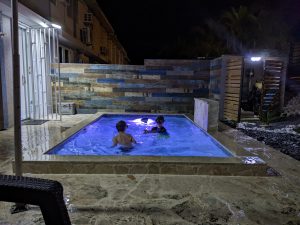 Wonderful beginning to our PR vacation.