This first day of September was overcast with periods of light rain until 10 pm tonight when it started raining with a vengeance. There is even thunder and lightening to make it more dramatic. But at least the worst of the rain held off until after a gathering of my dining-in group here at the cottage. 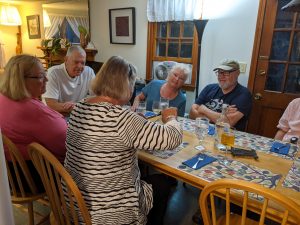 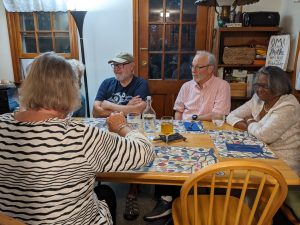 I had hoped for a sunny afternoon and had asked everyone to come at 4:30 so we could enjoy an outside summer dinner cooked on the grill. I’ve known for days that it was supposed to rain today, but I kept watching the weather and believed the heavy rain would begin after our dinner. But when it started drizzling this morning, I decided to grill the food before people arrived and eat inside. When they arrived, however, it was not raining and everyone decided to sit outside to have drinks and the special appetizers contributed by Peter and Karen Baranowski. It was fresh tomatoes and mozzarella cheese on slices of baguette from the French bakery. Yum! The rain kept holding off, so we stayed outside for the delicious and beautiful salad brought by Bruce and Jane Woodin. Another yum. I figured we were pushing it, but the weather kept holding, so I served the marinated and grilled veggies, beef, and chicken on rice pilaf and the tasty corn casserole brought by Terry and Olivia outside as well. As we were finishing the dinner, it was starting to rain just a little and I saw a mosquito, so it was time to go inside for dessert. 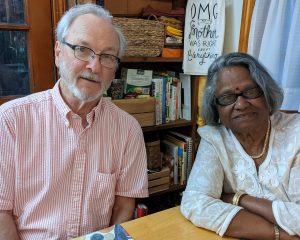 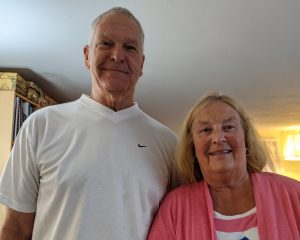 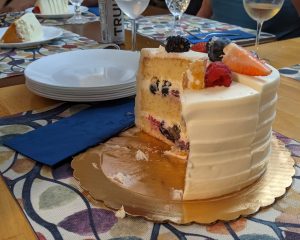 On August 28, Olivia and Terry White celebrated their 55th wedding anniversary. Then on August 29, Peter and Karen Baranowski celebrated their 50th. Midge Frieswyk volunteered to bring a special cake for dessert to honor the special occasion. Whole Foods makes a Chantilly cake that is really delicious, so Midge brought that to celebrate the anniversaries. It was a wonderful evening with friends.