The north wind was blowing strong today and tonight we have gale warning going into effect until Monday. I just came in from taking Shadow out for his last outing of the evening, and it was obvious that the temperature is dropping, The precipitation predicted for tomorrow might come down as snow. And speaking of snow, 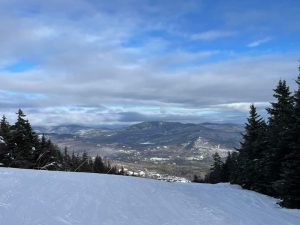 I saw photos on Facebook of the Goldstone gang on the slopes in Maine with friends. 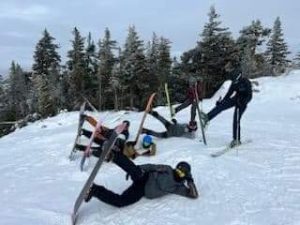 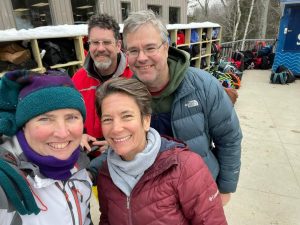 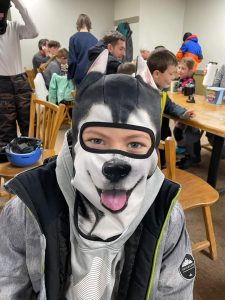 I slept in this morning and by the time I did my morning ablutions, traveled around town doing plant watering chores for out of town friends fed the cats at 43 Grasmere, and stopped at the PO to send a package to Ziggy and Coco, it was after noon when I got home. Lunch, walk with Shadow, puzzling, playing fetch with Shadow, taking photos of the huge gaggle of geese down by the dock (75 and counting), 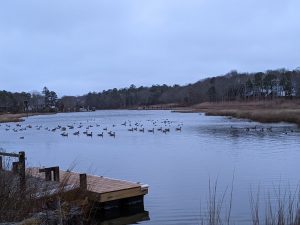 more puzzling . . . and suddenly it was dinnertime. I fixed dinner and decided to kick back and watch a movie. Today there was a suggested list in the NYTs This Morning online, so I started with the first one. It was a mind trip. Not the frivolous entertainment I was looking for, but very thought provoking once I worked through the weirdness. I watched “Bardo: False Chronicle of a Handful of Truths.” A summary I found online described the plot this way: “An acclaimed journalist-turned-documentarian goes on an oneiric introspective journal to reconcile with the past, the present, and his Mexican identity.” Much of the film is in Spanish, but it is captioned, and you really don’t even notice. As one example of weirdness, at one point, the journalist was sitting atop a pyramid of dead people having a conversation with Cortez. In another scene, Silverio, the journalist, is talking with his dead father in a huge public bathroom. Strange scene, but the father does impart words of wisdom: “Age comes without warning. Then it turns into a full-time job. Walking, eating, using the bathroom . . . everything’s a problem. No one ever told me. Nobody ever warns you about it.” Then Pa goes on to talk to his son about success: “Take a swig of success. Swish it around and spit it out. Otherwise, it will poison you.” There were many of these thought-provoking statements throughout the film, but despite that, I almost stopped watching at least three different times. I put the movie on pause each time, but then decided to persist. I’m glad I did. In my opinion, it was ‘very out there’, but one needs a mind stretch once in a while.