It was another beautiful day here in Puerto Rico with no rain. I couldn’t have ordered more beautiful weather for my time here. There is a chance of rain in the afternoon for the next two days, but it looks like the mornings should be nice.

We got a slow start this morning, but once we got out and about, we had a great time. First, we went to Steps Beach to go snorkeling. 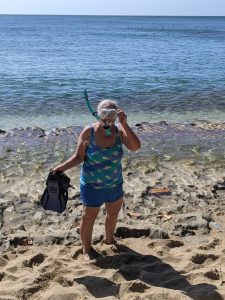 When we first got in, Jo lost one of her fins. We all looked and looked but didn’t find it. When everyone else gave up the search, I suggested to Ziggy that the two of us fan out and give one last look. I found it floating on the water further from shore than I thought it should be. Then when we all started out for the reef, there was something in the water stinging us that made us itch. Coco decided to go back and eventually Ziggy went back as well. But I decided that the underwater view was worth the aggravating itchiness. After Justin got Coco back to shore, he came back to join me. I love snorkeling and can never get enough of it. I especially like snorkeling at Steps Beach, as well as some of the other Rincon beaches, because they have fan corals swaying in the underwater world. When Justin and I got back to shore, Ziggy and Coco had taken off on a walk. So we took off to follow them. 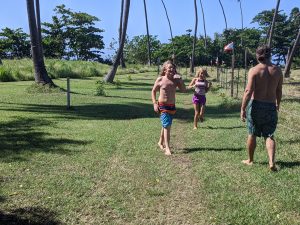 The land next to Steps, named for the concrete steps that sit on the beach, 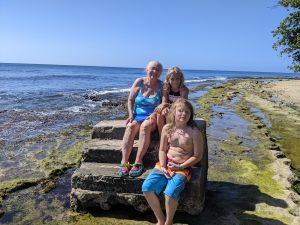 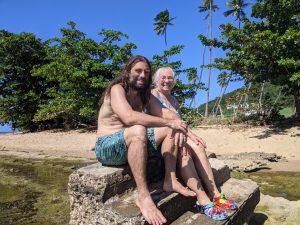 is used for grazing cattle. Since I was last there, the town has put up a barbed wire fence marking public land next to the beach, that was once used by the grazing cattle, a great swath of land for walking. The town is trying to preserve the land adjacent to the beach as belonging to the people so if grazing land is sold for building condos, the buildings will not be right on the beach.

Next, we drove to waterfall in Rincon that I have never been to before. It is called El Ultimo Brinco which translates as The Last Jump. 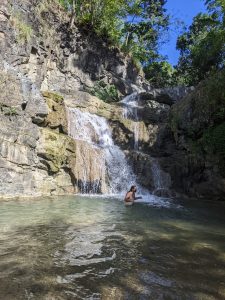 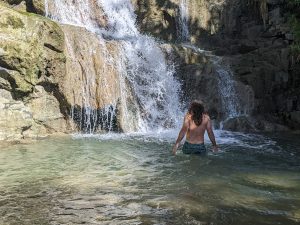 We got home just in time for the arrival of two of Coco’s friends that are still with us. 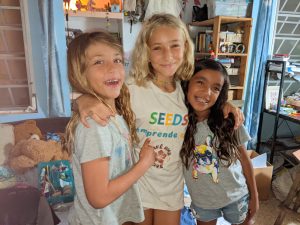 They have been having a wonderful time. While they played, I did some fallen tree branch and invasive plant clearing which I love doing. We are now getting ready for a late dinner. My time here has flown by. I only have two more days before I fly home. I haven’t even checked the weather at home, but I know the change in temperature is going to be shocking!