On November 19, 1493, Christopher Columbus, on his second voyage to the New World, landed on the northwest coast of Puerto Rico close to present day Aguada. This afternoon Justin and I were driving down out of the hills to Aguada and on to Aguadilla to do some shopping. But we never made it. As we drove, we started seeing people riding their horses and ponies. When we got to the main road, there was a steady stream of people riding. 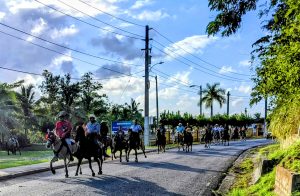 That reminded Justin that today was Columbus Day, a day where everyone that lives in Aguada and has a horse or a pony, heads downtown and to the beach. Ziggy was at an all afternoon birthday party, but Justin called Jo to see if Coco would like to come see the horses. She did, of course. So, we turned around and went back home. On the way home, Justin decided he would ride Hopi down to the beach and meet Coco and me there. 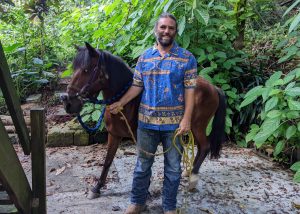 Jo needed to stay home for a propane delivery, but she could leave long enough take Coco and me to the beach. We let Justin get a head start and then as we drove, we spotted Justin and Hopi. Coco decided she wanted to ride, so we dropped her off with Justin and he led Hopi as Coco rode. 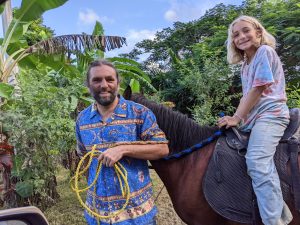 Jo had to drop me off when we reached the road that goes to the beach as it was for horses only today. I walked the short distance to the beach and watched the parade of horses while waiting for Justin and Coco. Then I saw Jo walking toward the beach. She had decided to park the truck and join us as she was convinced the propane delivery was coming today. If they were to come, they would call her, and she could go home. We sat and talked and soon we saw Justin, Coco, and Hopi coming our way. 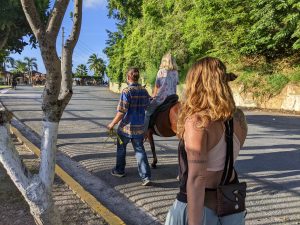 We went to get photos and Coco called us the paparazzi!

It was beautiful on the beach. 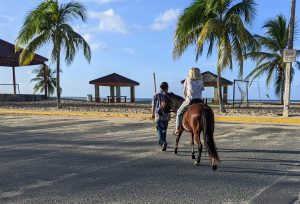 Justin took off Hopi’s saddle so she could enjoy some beach time, and immediately, Hopi laid right down and rolled in the sand. 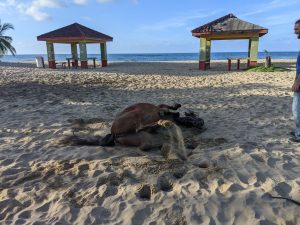 Justin says that is her beach happy place. Then she went down to walk along the water and finally decided to go to a grassy area to have a snack. 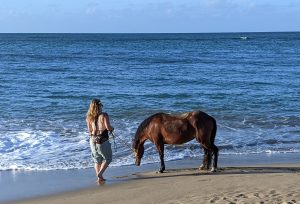 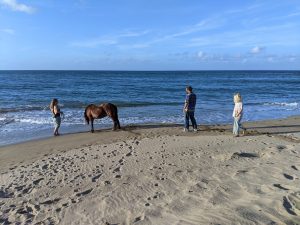 Justin started home on Hopi and Coco walked with Jo and I back to the truck. By the time we headed up the mountain, Justin was about half-way home. Again, Coco decided she wanted to ride, so we left her with Justin who would walk and lead Hopi and Coco home. 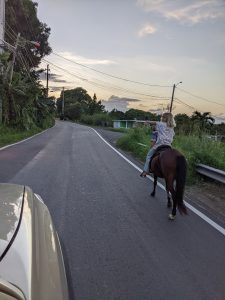 It took them about 30 minutes and a little later we went to pick Ziggy up from his all afternoon and evening birthday party. Then we went downtown Rincon for a sushi dinner. Then we walked to the plaza where we had heard that earlier at least 500 people were celebrating. 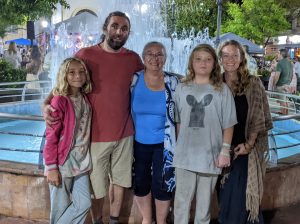 There were still a lot of people and a band with singers in full swing. We stopped in a shop where Justin wanted to talk to a friend and while he was talking, Coco, Ziggy, and I played corn hole. It was a full day, so we are thinking Sunday will be a quiet day at home.