Ziggy, Coco, and I spent our morning and early afternoon at Monticello in Charlottesville. 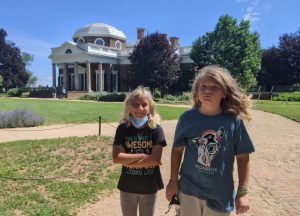 We started with a Highlights Tour of the house and gardens, and we all found things we loved. Coco loved the flowers in the garden, 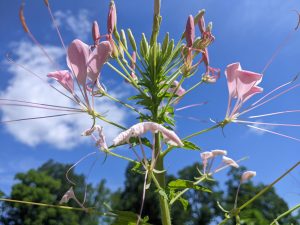 Ziggy was amazed by the number of tadpoles in a small pool in the gardens, 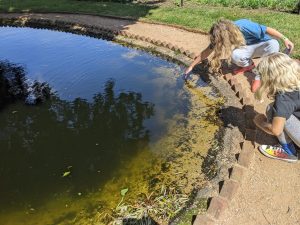 and I loved it all. The house tour was short enough for the kids to enjoy it and be awed by many of Jefferson’s inventions. We entered through the East Portico into a room filled with artifacts. The only remaining artifacts from Lewis and Clark’s expedition are in that room. 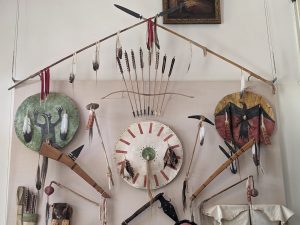 From there we entered the library. At one point Jefferson had 6,000 books, the largest personal collection in the United States at that time. 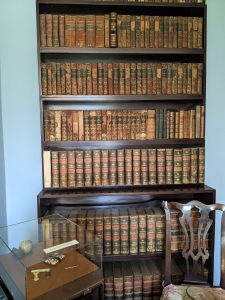 But during the War of 1812, many of those books were donated to the Library of Congress. Later Jefferson started adding books again. He always said, “I can’t live without books.” The next room was his most private room, his bedroom. His wife died before the main house as we know it today was completed, so she never shared that bedroom with him. He liked alcove beds, but Monticello didn’t have a wall suitable for that. Instead, he converted a doorway into what I would call a “cubby hole: bed. The head of the bed is against one side of the doorway and the foot against the other. 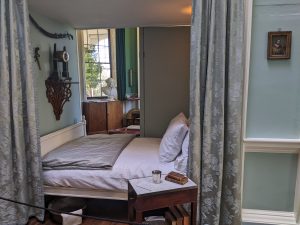 These are the types of beds at the Roberts Mountain Retreat which was a point of interest for Ziggy and Coco. From the bedroom, you enter the parlor or living room and the dining room. The dining room was painted a bright yellow, the most expensive paint at the time, to give a bright feeling to the room no matter the weather. 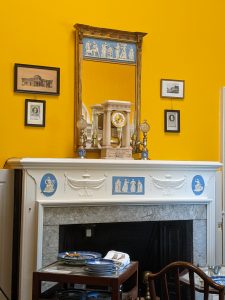 There are too many details and inventions of Jefferson’s to mention, but they were impressive. The flower gardens on the expansive front lawn were beautiful and Coco took close up photos of most so she can draw them later. 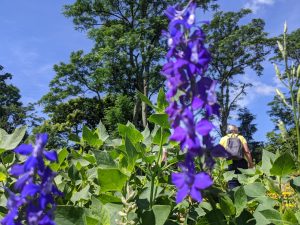 Along the outside ground floor on the south side of the house is where the impressive kitchen, the most modern in its time, is located, 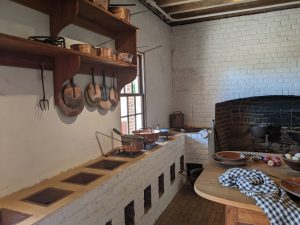 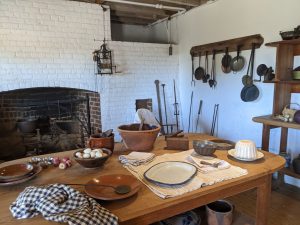 along with the dairy, the smokehouse, and the rooms where some of the enslaved house servants lived in very cramped quarters. We wondered Mulberry Lane to where the slave quarters were located, 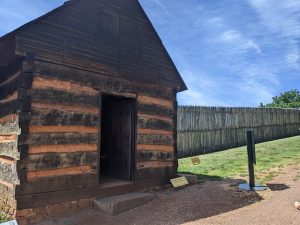 the stables where the carriage horses were kept, 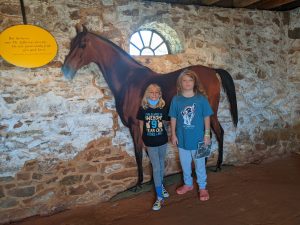 and the beautiful vegetable gardens. 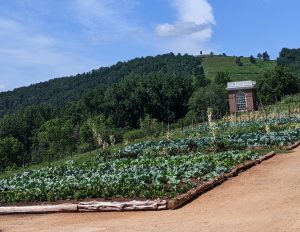 Thomas Jefferson was a brilliant man, a man of many talents and achievements, but hanging over this is the dark side of Jefferson. He wrote the famous words “all Men are created equal” and in his original draft of the Declaration of Independence, in soaring, damning, fiery prose, Jefferson denounced the slave trade as an “execrable commerce…this assemblage of horrors,” a “cruel war against human nature itself, violating its most sacred rights of life & liberties.” But he inherited land and slaves from the generations before him and kept slaves throughout his life. And as the Virginia abolitionist Moncure Conway scornfully remarked, despite Jefferson’s enduring reputation as a would-be emancipator, “Never did a man achieve more fame for what he did not do.” At the end of our visit, we had a twenty-five minute question and answer time with an acting Thomas Jefferson. He was in period dress and was so convincing that I felt like I was listening to the real Thomas Jefferson. 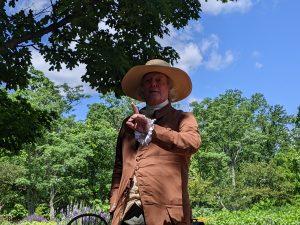 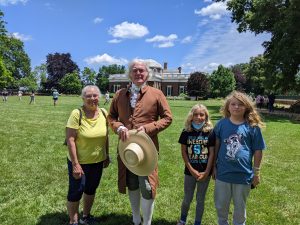 He answered questions addressing his anti-slavery rhetoric and his lack of action. Listening to his point of view was informative.

We drove from Monticello to the University of Virginia to have our picnic lunch under a huge, old ginkgo tree, my very favorite tree, right next to the Rotunda designed by Jefferson. 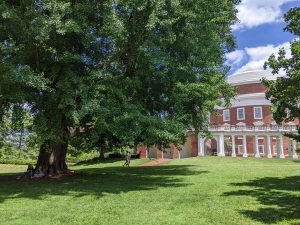 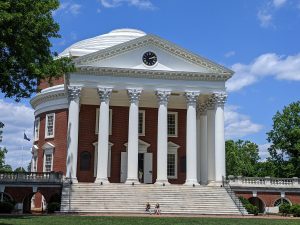 And then we headed back to Roberts Mountain to spend some afternoon free time with Justin and Jo. Then Ziggy, Coco, and I headed back down the mountain to the Gate House to pack and do a little clean up before going back to the Retreat Center for dinner and a final gathering around a fire where the Retreat participants shared their music. 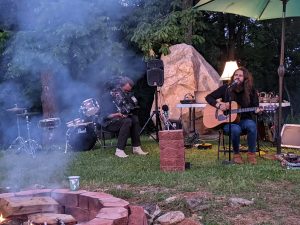 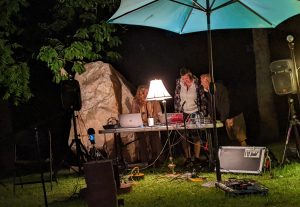 .
Tomorrow morning Jo, Ziggy, Coco, and I head to Richmond for our flights home. We will leave Justin behind as he has two more weeks of work here. It has been a wonderful seven days here for me—quality time with Ziggy and Coco that I have never had before. We have all found Roberts Mountain to be a very special place in this world. Hopefully we will get to return for a repeat performance.