When I started writing this log, it was 11 degrees F outside and WeatherUnderground said it felt like 2 degrees. Brrrrrr. It also says the temperature rose to 23 degrees today, but that was at midnight. It only got up to 16 degrees during the daylight hours. And at midnight tonight, the temperature will start rising, getting into the 40’s by tomorrow afternoon. This day was a cold one and I, for one, am glad the deep cold is short-lived. At least for now.

My book club met on Zoom this morning to discuss our latest book, The Immortal Irishman. As I have mentioned in prior logs, this is a biography that tells about more than the life of Thomas Frances Meagher. It tells much of the history of the people of Ireland in the 1800’s and the history of the Irish immigrants who fought for the Union in the Civil War. What struck me most about the book was the obvious parallels between what is happening in this country right now and what was happening just before, during, and right after the Civil War. History does repeat itself. If you have not read the work of Robert Pape at the University of Chicago regarding those who participated in the insurrection on January 6, you should. I think we are going to be hearing more about the profile of those arrested and what prompted them to get involved. Replacement Theory was an issue in the 1800’s and it is still alive and gaining ground today.

Immediately following my book club Zoom meeting, I headed downtown to pick Ollie up as the elementary schools were having an early release day. I brought him home with me and we had a delightful afternoon together. Ollie had eaten what he called brunch but was ready for a real lunch. So, we ate Oma’s homemade chili. Then we worked on his homework. 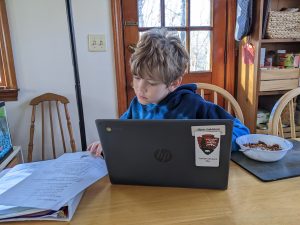 This required him to do some writing, so he got out his Chromebook. I was sitting across the table from him and was looking at the sticker on the lid of his computer. It was a sticker declaring Ollie Goldstone to be a US National Park Junior Ranger. Ollie must have read the question on my face as he stopped writing and said, “You must be wondering about the sticker on my computer.” I said I was as I did not know when he had recently visited a National Park. He then explained that receiving the status of Junior Ranger it is part of a class activity. Every student had to choose a National Park to learn about. He explained that he chose the American Samoa National Park since Granddad and I had been there, and Granddad had lived in American Samoa. I didn’t even know he knew that. But we had a wonderful conversation about the Samoan islands, both American Samoa and its next door neighbor, the island country of Samoa. I showed him photos of Granddad and I visiting one of the villages in American Samoa that borders on the National Park 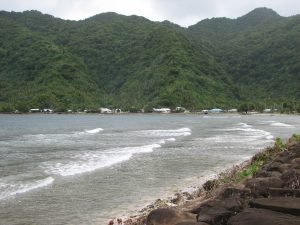 and photos Granddad had taken of the mountains in the park. 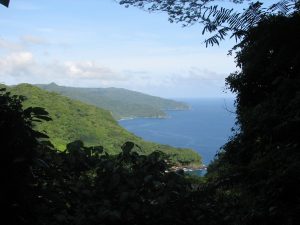 Then I showed him my photos from the island of Savai’i in Samoa. He knew that was the island depicted in Disney’s Moana. Then we changed gears and he insisted that I watch the first two episodes for The Book of Bobo Fett. I had no idea what that was. He explained that it is a Star Wars television series and that he had already watched the first two episodes. But he was super excited that Episode 3 will be out tomorrow morning at 7 am. He wanted to make sure his Oma was up-to-date on this Star Wars series as it is so good. As we watched the first two episodes, I got a complete scene by scene education! And I was given marching orders to make sure I watch Episode 3 tomorrow. I don’t know if we have such a good time together because Ollie is more an adult than he should be or if I am more of kid than I should be. Probably a little of both.