This Eleventh Day of Christmas brought sunshine for the first time in days. It was glorious. And at the end of the day, it brought eleven geese a swimming (and one lone duck chasing them), not eleven pipers piping, although the geese sounded as if they were piping just a bit off tune. 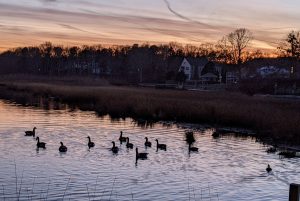 I picked Ollie up after school this afternoon and sat in the car and read while he played soccer and football on the playground after school. It was just too beautiful to go home and go inside. By the time I got home, the sun was setting so I headed down to the dock with Shadow to play ball in the last light of the day. There they were. On this Eleventh Day of Christmas, there were exactly eleven geese floating in the water by the dock. Their honking let us know they were not pleased that we had joined them, but eventually they settled down making for a very peaceful and beautiful sunset with the new moon looming above us. 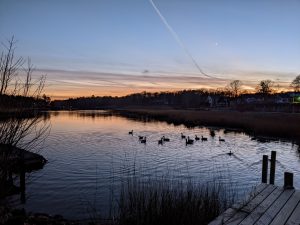 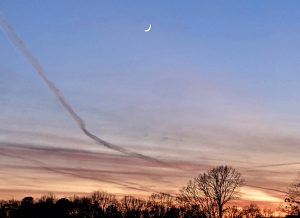 Today I finished one of the jigsaw puzzles I have been working one for the past couple of weeks. It is one in a series of puzzles by contemporary folk artist, Eric Dowdle. On his website it is stated that, “Exploring the details he includes in his paintings is an adventure all its own.” Most of his paintings have been made into jigsaw puzzles. The puzzle I completed today was called Italy’s Cinque Terre. It is a scene from one of the five towns along the Ligurian Sea that in 1999 became Italy’s first and smallest National Park and now a UNESCO World Heritage Site. The scene is of the town of Manarolla where olives and lemons are grown on the hillsides by the sea. On cinqueterre.eu.com, Manarolla is described as follows: “Manarola, built on a high rock 70 metres above sea level, is one of the most charming and romantic of the Cinque Terre villages. The tiny harbor features a boat ramp, picturesque multicoloured houses facing the sea, a tiny piazza with seafood restaurants.” In a photograph it looks just like the beautiful scene I have been trying to piece together. 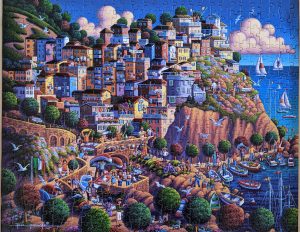 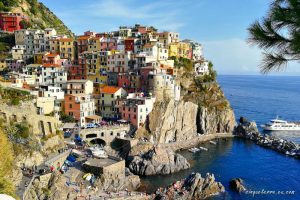 I work jigsaw puzzles, not because I love it, but because it is supposedly good for my brain. The process exercises both the left and right brain at the same time, improves short-term memory, and improves visual-spacial reasoning. Plus, working a puzzle can relieve stress by helping you enter a meditative state. Win-win, right? Well, not for everyone. It can be a form of torture according to two of my dining-in friends! And yes, I often get frustrated thinking a puzzle is entirely too difficult, but if I persist, it pays off. And with this particular puzzle, when I got frustrated, I simply started researching things in the puzzle that are listed on an accompanying information sheet. I started learning things about Cinque Terre that I did not know. For instance, there are lemon trees in the puzzle and a reference to an Italian poet I had never heard of, Eugenio Montale. I learned that he wrote poems about everyday life. He wrote about the puddles, the lanes, and the lemon trees that describe the landscape along the Ligurian Sea where Manarolla makes it home. I read his poem, Limoni, which he ends by calling lemons the “trumpets of radiance” and it helped me smell the fragrance of lemons as I continued to work the puzzle. I also learned about Via dell’Amore (Trail of Love) shown in the puzzle. The one kilometer path connects to another of the five Cinque Terre towns, Riomaggiore. And then, of course, I had to learn about that town. So, you see, for me working a puzzle is more than putting the pieces together. I will now trade with another dining-in friend and start working on another Dowdle’s scenes, this one from Norway.