Tonight is the final countdown to midnight and 2022. Woohoo! So, I am writing this log a little earlier than usual as it will be late when I get home. I am going to my friend Olga’s a little later this evening to make merry and bring in the new year. So let me wish you a Happy New Year a little early. HAPPY NEW YEAR!!!

This morning I went to Heather’s to do the pet chores. The kittens were especially cute this morning. 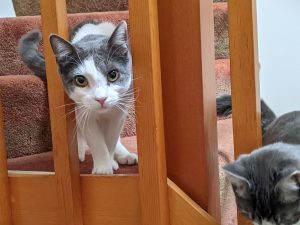 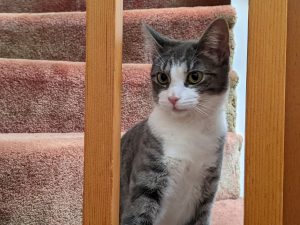 That is until I found that they had breached my ‘fort’ and had scattered the parts of the hydroponic grow system once again. They are still cute, but persistent and exasperating. I put the system back together and started to head home. I got no further than the front door, however, as a huge Misfits order arrived. Misfits Markets delivers organic groceries to Heather’s and to my house once a week. I get one small box a week, but Heather’s delivery was huge. One of the two boxes was so heavy I couldn’t carry it. I had to roll it into the house and to the kitchen. The order was not supposed to come until tomorrow when Heather and family will arrive home. But it was here today, and I spent a fair bit of time getting it put away. I then came home to have lunch, work a bit on my puzzle, and then it was off to the Quashnet River Trail with Shadow for a New Year’s Eve walk.

I took time to read the information board about the trail and learned that in the 1800’s, the river was dammed and there was a gristmill at the trail head. It burned in 1894 and the beautiful little trout stream was converted into cranberry bogs. The bogs were flooded with salt water during Hurricane Carol in 1954 and the bogs lay fallow for a number of years. Restoration of the river began in the 1970’s and now we have that beautiful little stream and a wonderful system of trails. 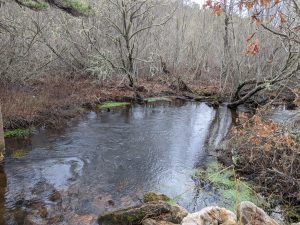 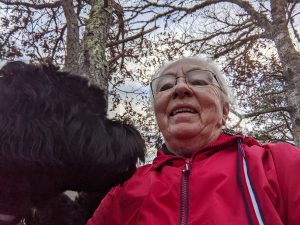 Today, Shadow and I saw three different sets of fishermen, telling us there must be brook trout in the river. It is catch and release only, so unfortunately you can’t catch and cook.

However you decide to celebrate tonight, have fun but be safe. Again, Happy New Year.