A trip to the Outer Cape today felt like a polar exploration. 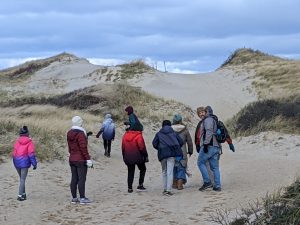 Well, it was not quite that cold, but with the wind chill it felt like it was below freezing all day. The wind was blowing a good 20 mph from the west, strong enough to keep the sand swirling around our feet. Despite the cold, our trip to High Head Beach to see the seals was well worth it. 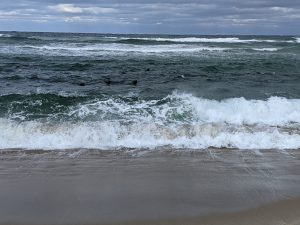 Our first destination was High Head Beach in North Truro. We parked and then hiked the half mile to the beach. We were somewhat protected from the wind by the dunes and the sun shining, so all was well. We made the ascent up the dune and when the view of the turbulent ocean came into sight, it was really breathtakingly beautiful. 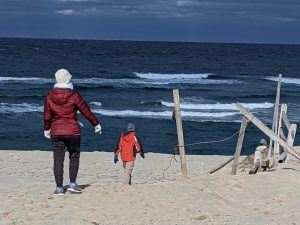 When we got down to the beach, however, the wind was wicked. We walked down the beach to see the grey seals and despite the cold, we just kept walking. We let Shadow off his leash and frolicked and ran for more than hour. We observed the seals, but he totally ignored them. That was a good thing. As we walked, we found the remains of one very lobster and large clam and crab shells. The remains of seal dinner? 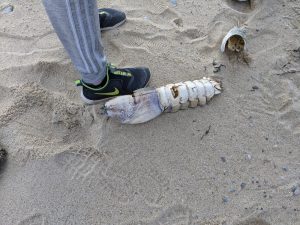 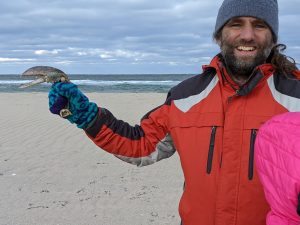 At one point, Sam picked up a black plastic lid for a 5-gallon bucket. When he went to put it down, he decided to give it a spin to watch it roll on its edge. It did, but it didn’t stop. The wind was blowing so hard that as fast as Sam could run, the lid could spin down the beach faster. 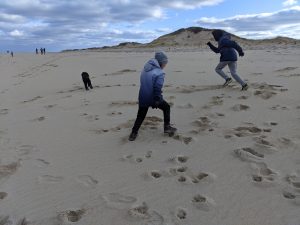 When he did catch it to lay it flat, it would take off again with Sam and Shadow running after it. It was quite a show. When we turned around to walk back, however, it was a show of a different kind. The wind was blowing so hard into our faces, that some put on their Covid masks for protection. 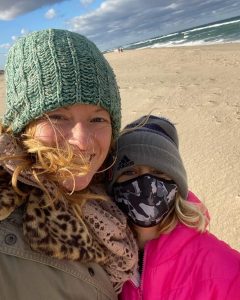 Others turned around and walked backwards. Despite the wicked wind, I think most everyone really enjoyed the adventure. Near the end, Coco was unhappy with the cold, but she kept her complaints low-key. Despite the cold, I think she still enjoyed it, but when Auntie Heather mentioned driving into Provincetown to get hot chocolate, her eyes lit up.

We drove to P-town and got coffee, tea, and hot chocolate at The Wired Puppy. Great name. 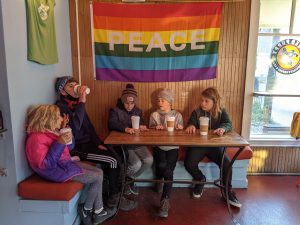 We walked through town, some us still with our cups in hand for the warmth. As we were walking through Provincetown, Justin noted that I had left out one kind of beach when describing the types of beaches found in the various areas of Cape Cod. I had listed the rocky and pebbly beaches of the Upper Cape, the beaches adjacent to the marshy areas of the Mid-Cape, and the dunes of the Outer Cape. I had left out tropical beaches!

As we left Provincetown, we drove to ‘lands end’ to see the Pilgrims’ First Landing Park before heading home to have our favorite family dinner—sushi. It was a great way to end a great day. 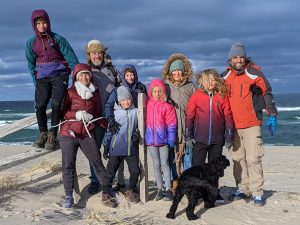