The plan for the day was to have a quiet morning making granola for Heather and then go with the Goldstones to pick cranberries in a dry, wild cranberry bog. After that, we planned to go for a nice long walk. Not all of that happened, but that was the plan. Another plan for today was for Jed to take Andrew and Lily, the Dearman’s fourteen-year-old that wants to become a scientist, to Woods Hole to tour the Smith dock. They knew they could not get aboard the scientific research vessel, the Atlantis, that is currently docked there, but at least they would get to see it up close. That part of the plan happened. While Andrew and Lily were gone, the other two Dearman children, Charlie and Lena, came over to say farewell as they were headed home to Larchmont, New York as soon as Andrew and Lily returned. I was in the basement when Charlie and Lena. When I came up, I invited Charlie and Lena inside and Lena immediately started admiring my sea shells on display in the living room. I asked if she would like to take a quick look at all of the shells I collected while sailing around the world and she very enthusiastically said yes. So, we all went down to the basement. While Lena looked through the bins of shells, Charlie and I played a game of table shuffleboard. I won despite the fact that Charlie is amazingly accurate in knocking off most of my pucks. We were having a great time when we heard Shadow bark and figured someone had come to retrieve them. It was Lily to tell them it was time to get on the road. I have grown very fond of the whole family and I’ll look forward to their next visit.

I got back to making granola and got most of it baked by the time Heather sent a text saying they were headed to the dry bogs to pick cranberries. It was later than planned but that was because Jonah had to go to Urgent Care to have his ear checked this morning. Last night the kids thought it would be great fun to throw apples from Shirley’s apple tree at each other. It was not a good idea as Jonah got a really hard hit right on his ear. He spent the rest of the evening with an ice pack on it and this morning it was painful. The doctor saw no serious damage but said his ear drum was very red indicating an infection. Heather and Jed seem to think the redness is probably inflammation from the hit rather than an infection. But whatever, when he got home from the clinic, he took a nap. They waited until he woke up to go cranberry picking.

I took off with Shadow to meet them at the dry bog. On the way, I drove by the cranberry bogs close to where they used to live. I have been driving by those bogs daily for the last two weeks to try and catch the fall harvest. I did not expect that they would be harvesting on a holiday, but they were, and I just had to stop and watch. I sent a text to Heather explaining that I would be still be coming to pick cranberries, but I would be delayed. 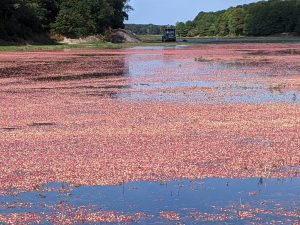 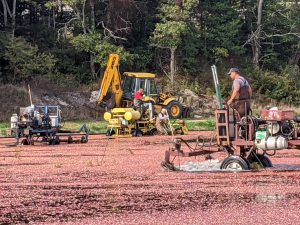 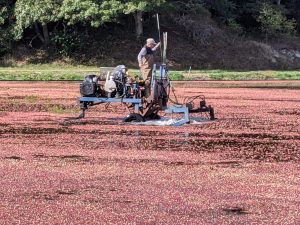 I absolutely love watching the cranberry harvests and today was no exception. I took some photos and realized the harvesting machines were nearing the end of their work, so I decided to go see if Sam, Jonah, and Ollie would like to come watch for a bit. They did want to, so we left Heather and Jed to pick Thanksgiving cranberries. Long story short, we did not go for a long walk. But we enjoyed watching the harvest and then stopping at Tony Andrew’s to buy more little pumpkins. 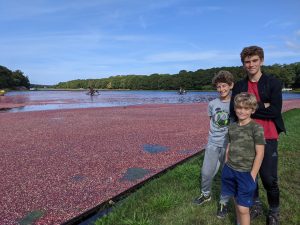 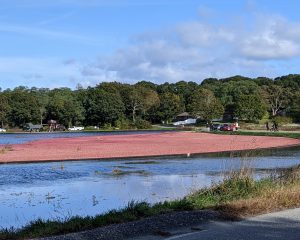 When we went to get the big pumpkins last weekend, in addition to the large pumpkins, the boys bought one little pumpkin for them and one for me. Then this weekend when Heather brought in the plants from a display ladder on the front porch, she and the boys decided they wanted to keep the ladder on the porch and decorate it with tiny pumpkins. We bought fifteen tiny pumpkins and what I call a ‘Big Ugly’ pumpkin for Heather. It looks like it has peanuts glued to it. Heather had expressed a desire for one when we were there last weekend, but they had none then. 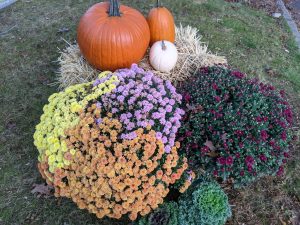 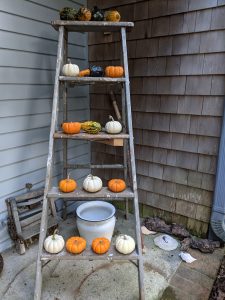 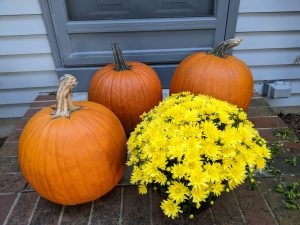 The boys and I agreed that this October has been more fun than any we can remember and we are going to continue to decorate for Halloween and enjoy every minute of it. Heather and Jed’s home has two front entrances and both of those are decorated with pumpkins. Their front yard has a pumpkin display with a bale of straw and colorful mums and the steps up to my front door are decorated with pumpkins. 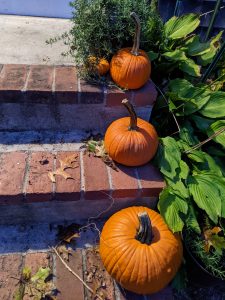 Hopefully, we are done with pumpkins!