The day began with another soccer game. I ended up driving with Heather and Jonah to Weymouth for the game instead of driving separately. It was a good game despite the fact that Jonah’s team lost. Next weekend, he and Sam will be camping with Scouts, so I won’t get to see him play again until Sunday the 24th in Rhode Island. Then there is more camping the weekend after that and no opportunity to see him play. So I’m glad I went today. It is so fascinating to watch the interaction of the boys as they play. 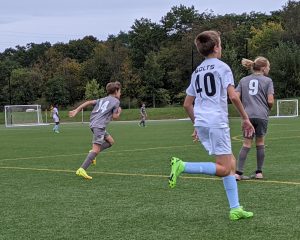 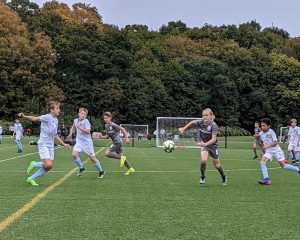 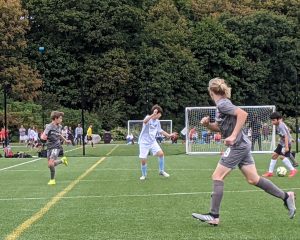 This fall Jonah is playing with a number of boys that are new to his team. When I reviewed the photos I took today, a teammate named Tristin was in almost every photo with Jonah as they both play forward positions. I chucked, as Tristin is now the one with long hair in a ponytail and wild-haired Jonah now has short hair. But more importantly, the photos showed that they are developing an on-the-field relationship to try and get that ball in the goal.

On the way home we stopped at a Halloween Spirit store to see if they might happen to have a specific Marvel character costume for Jonah. They didn’t have what he was looking for, but Heather did find a banana costume for Jed. Ollie will be a gorilla and Jed will walk alongside him as his Big Banana. I visited for a few minutes with Marti as she was leaving momentarily. Then it was home to get ready for the late afternoon barbecue at the Dearman’s, my almost next door neighbors. Heather, Jed, and boys were also invited. We divvied up the food and my contribution was salads, appetizers, and trimmings for the burgers. We had hoped the rain would hold off, but it started just before we got back to Heather and Jed’s and it has stayed with us, off and on, since then. Thankfully it was a light rain, and we didn’t let it spoil our outside barbecue. Andrew and Lara’s three children are the same ages as Heather and Jed’s three and they had a great time playing outside until almost 10 pm. They did stop early on to watch a movie and dry off a bit, but then after dinner they were back outside in the dark having a fun time.

Shadow and I have been invited to join Heather and family for a long walk in the woods tomorrow. The other thing on my ‘to do’ list is to make granola. I was not home with Shadow much today, but tomorrow will make up for it as I should be with him all day.