I got a text at 7:30 am with a photo of a Maximo Solar van parked beside Justin and Jo’s home. 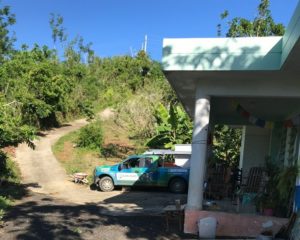 The solar had arrived!!! I wanted to shout from the rooftops. But I restrained myself, waiting to hear that the system had been installed and was working. Later in the day, Justin sent photos of the system installed and the lights on in their house. 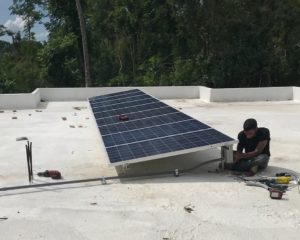 I was elated. I am so happy that they will enter 2018 with electricity. 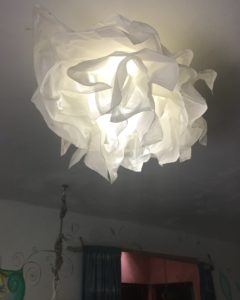 Their electricity from the grid was restored the first of December, but that didn’t last long. It was intermittent and then it was gone. But now the lights are on as long as the sun shines. Happy, happy for Justin, Jo, Ziggy, and Coco. But so sad for so many Puerto Ricans who still have no electricity. I sure wish I could wave a magic wand to restore power to all of Puerto Rico.

It seems to be chilly everywhere, so we joined the crowd by having another chilly day here. But at here the least the sun was shining and I know Tennessee is not nearly as cold as back home. So, all is well. Janet came over late-morning so that I could help her make her first ever batch of granola. 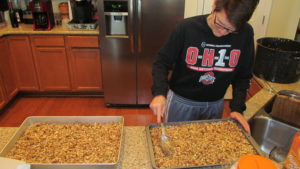 It is truly interesting how my granola recipe has evolved over the years. Somewhere I have the original recipe that I got from a woodworker in Minnesota in the 1970’s. I’ll have to find it to compare to today’s version. I used the same recipe for 40 years, but in the past couple of years, the recipe has gone from mostly oats with some nuts and seeds to a half and half mixture. I used to use olive oil; now I use coconut oil. I used to use honey; now I use maple syrup. I used to eat granola almost every morning; now I have it for breakfast no more than twice a week. Just interesting how things change over time.

Tonight Patsy, Joe, and I are at Janet and Monica’s watching the Cotton Bowl. Ohio State is playing USC. Janet and Monica are both Ohio State graduates and enthusiastic football fans. So, tonight we are all enjoying the fact that Ohio State has been ahead for the whole game. It will soon be over and Patsy, Joe, and I will head home. Tomorrow morning, I go into downtown Nashville with Janet to help her with her Saturday morning volunteer work with the homeless. After that, we will meet Monica and some friends who are visiting in Nashville on the famous Honky Tonk Strip. Sounds like fun.