Christmas Day ranged from blizzard to sunshine on Cape Cod. We were up and opening presents by 7:15 am, although I was awakened by a herd of reindeer upstairs at 5:59 am. Actually, that was just an over anxious Sam who was told he had to wait for brothers to wake up! Santa made three little boys in the Goldstone household very happy this year and I heard from Justin and Jo in Puerto Rico that Santa also put smiles on Ziggy and Coco’s faces. 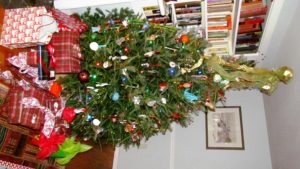 Sam got the sled he wanted, 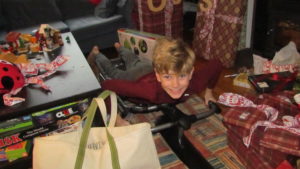 Jonah got Legos which were high on his list, and Ollie got a hanging tent for the backyard called a Hugglepod. Ziggy got electronics sets 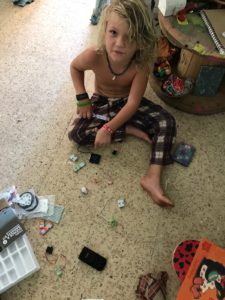 and Coco got the American Girl Welly Wisher Doll she was sure she couldn’t live without. It was love at first sight this morning. 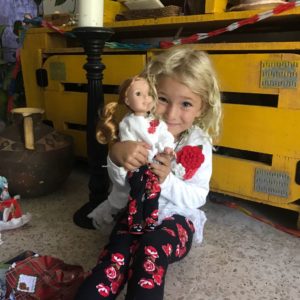 Justin said Ziggy really enjoyed inventing different gizmos and gadgets with the LittleBits set I sent him. And Justin and Jo sent me a family photo from today that I had requested. Since there was not a strong enough signal for a video call, the photo was perfect. 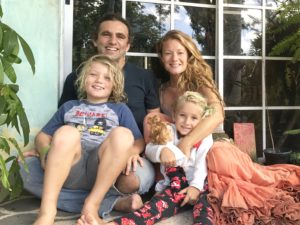 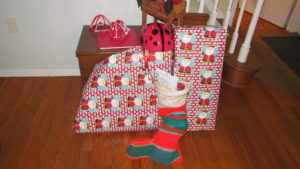 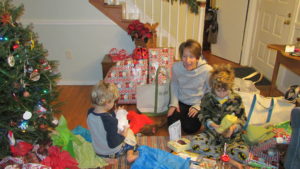 After opening Santa’s gifts, we stopped to eat a bite, and then launched into the many presents. I got Sam a draftsman’s table top board with all the things that go with it to encourage his recent interest in architectural and engineering design. I tried something new with Jonah and Ollie by giving them a shared gift. They both had asked for adventure gear for the backyard. Ollie really wanted a zip line, but I ended up getting a Slackers NinjaLine and Cargo Climbing Net. 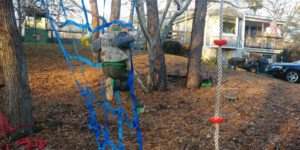 This line and net are strung between trees with equipment for turning little boys into monkeys. 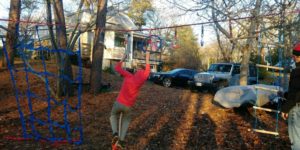 Heather read one of the books Ollie got aloud and it made us all teary eyed. The book was Malala’s Magic Pen telling the story of a little girl in Pakistan who thought she could change the world if she had a magic pen. It is a true story and, indeed, she is changing the world through writing with her ‘magic pen’ and has even won a Nobel Peace Prize. There were many special moments, 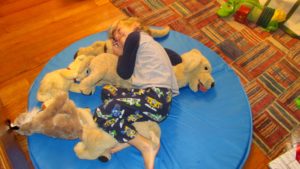 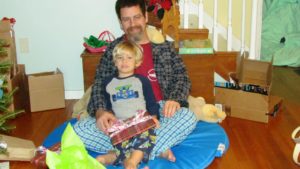 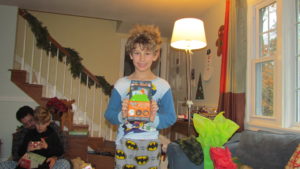 and special ornaments and cards made at school by Ollie and Jonah which were so precious. And Sam had gifts for everyone that he bought with his own money at school craft fair which was so very thoughtful. So we had a lovely morning and then all of a sudden the world darkened a bit and we looked outside to see icy rain pouring down and trees blowing sideways. For a few minutes it was a proper blizzard. But it stopped, or slowed down considerably, as fast as it came. By the time I left in the early afternoon, the sun was shining. But the blizzard was enough to shut down the airport in Boston for a couple of hours and to cause Heather and Jed to cancel their travel plans to Maine for today. By late morning when Jed talked to his mother, they had gotten 5 inches of fresh snow on top of the snow they got earlier in the week, and it was still coming down. So the Goldstones will drive to Maine tomorrow morning and I took the bus to the airport which was open again before noon. My 6 pm flight to Nashville went out about 25 minutes delayed, but I was at my sister’s house by 9:30 pm. We stayed up late talking, but it was the perfect end of a perfect Christmas Day.