The snow moon was officially full this afternoon when we couldn’t see it, but the sky was clear tonight and it was a beautiful presence. But is this is the snow moon, I just want to know . . . where is the snow? I took Jonah to his futsal game, not in Newton where it was supposed to be because the school hosting the semi-finals had a broken water main. Seems to be a broken record. The game time and venue was changed and it was back at Four Kicks, just across from the Gillette Stadium. 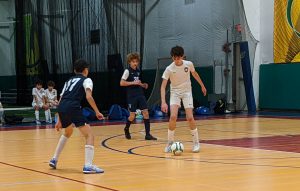 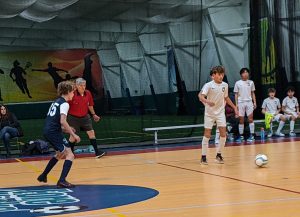 Jonah’s ACI team lost, so they will not proceed to the finals. So, futsal season is over for Jonah. Now on to winter training for the upcoming spring season. 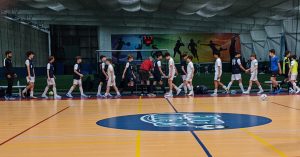 I spent my morning finishing another jigsaw puzzle. 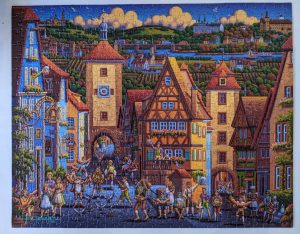 I started working jigsaw puzzles because studies have shown that they can reduce the risk of developing dementia. But jigsaw puzzles have become more important to me for their mental health benefits. After spending this morning completing another puzzle, I felt guilty for spending so much time ‘doing nothing’, while at the same time I felt completely renewed. For me, working a jigsaw simply clears my mind from everything else in the world. It is like hitting ‘reset’. So, I will continue ‘doing nothing’ and loving it.

To redeem my lazy self, I went to Heather and Jed’s in the afternoon to help with some basement clean up. They are having a new heat pump system installed and the installers have made a mess in the basement in the Lego play area, in the music practice area, in the storage bin area, and on and on. Heather and Jed kept asking if they should cover things and were told repeatedly, that no, that wouldn’t be necessary. Well, it was, but Heather had gotten most of it cleaned up before I arrived. I helped a little and then we launched into a purge festival—getting rid of things the kids no longer need. Then I headed home to play fetch with Shadow before returning to take Jonah to futsal. Another good day in the life.

It was truly COLD this morning. Around 11 am, I took Shadow for a short walk. I wore good winter gloves, not the little stretchy things I normally wear, but still my fingers were so cold I lost all feeling in them. Plus, my face hurt from the cold. Shadow was walking as fast as I allowed, so I think he was freezing as well. But it is warmer tonight than it was this morning, so all is well.

My oldest grandson, Sam, was supposed to have his 16th birthday party on January 21, his birth date. Unfortunately, his good friend Robert tested positive for Covid that morning, so Sam wanted to cancel and go when Robert could go with. The outing was rescheduled for today at Supercharged Entertainment in Wrentham with friends Robert, Sebastian, and Ethan. 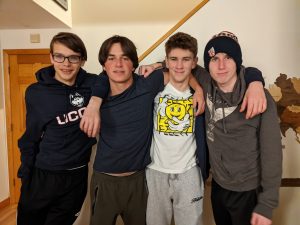 But when we got there, people were leaving. Supercharged’s water main had burst so they had to close for the day. What to do? Heather got on her phone to search out other possibilities. A similar place in Rhode Island looked the best and after a few tense minutes, she was able to make the reservations and off we went. Luckily, it was only 15 miles from Wrentham. It had the indoor go kart track we were looking for, plus it had something called Time Mission. I called it ‘escape room’ as you try to solve the puzzle presented in each room. 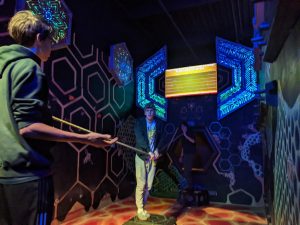 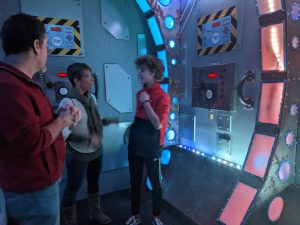 They advertise it as the biggest time machine gaming experience in the world. The ‘time machine’ has 25 portals (rooms) where you “put your intelligence, physical condition, and hand-eye coordination to the test.” Basically, you form teams to solve the challenge in each portal and try to amass as many points as possible. If you beat all the other teams playing at the same time, you become a Master of Time. The rooms are small, so you wouldn’t want more than five people on your team. Some of the challenges are mental and some are physical. All were fun. I was on a team with Heather, Jed, Jonah, and Ollie that we called the Goldpebbles and came in fifth. Sam and his three friends, Robert, Sebastian, and Ethan called their team Mike’s Cereal Shack, and they came in first—the Masters of Time. Only the boys got on the racetrack while Heather, Jed, and I watched. 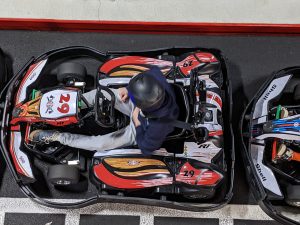 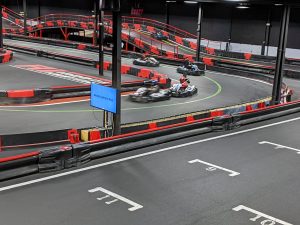 Ollie and Jonah joined in on the first race which was for ages 6+, the warm-up. Then Sam and his friends did two more races in the 16+ category (a little faster) 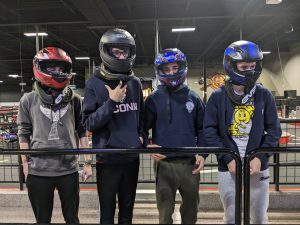 while Jonah and Ollie went to the arcade. 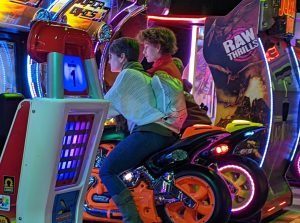 It was a fun filled afternoon followed by dinner back at Heather and Jed’s and then an overnight. 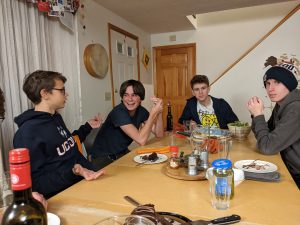 Once again, Happy Birthday to Sam!

Watching the weather on my phone tonight is a little scary. Every time I look, it is 2 degrees colder and is presently at 6 degrees F with gale force winds, so it feels like -16 F currently. This morning at 7:30 am when I took Shadow outside for the first outing of the day, it was windy, but didn’t really feel too cold. But as the day progressed, that changed quickly. Tonight, when I have gone outside with Shadow, I can really feel the cold and don’t want to be outside for too long. I’m still recovering from playing fetch for 15 minutes around 5 pm. I still have that burning feeling you get when you stay out in the cold too long. But if we can make it through tonight and tomorrow night, things should warm up considerably.

I spent most of my day today driving to Boston to pick up my Olga Mitchell from the New England Baptist hospital where she had a shoulder replacement on Wednesday. She is 89, which is always a worry with surgery, but she seemed to be doing great. Tomorrow we head back up north to Wrentham to spend the afternoon at the Supercharged Entertainment for Sam’s belated birthday party. It has a multi-level go-kart track and “Insane Fun Guaranteed” is the advertisement.

After I took Olga home late this afternoon, I made it to the last few minutes of a Nominating Committee meeting and then came home to play with Shadow. I ate an early dinner since I had totally forgotten to eat lunch and then I headed to Heather and Jed’s to take Sam to winter soccer practice. He has a cold and did not go to school today and decided not to go to practice tonight, so I headed home. Heather had taken Jonah to get his hair cut before taking him to indoor soccer practice, so was not at home. Jonah’s hair was growing out and getting a little on the ‘wild’ side. Heather sent photos and I love the new look. 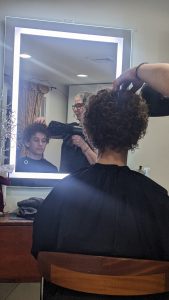 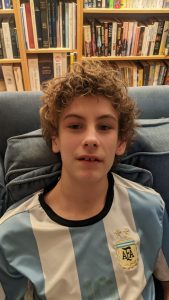 Punxsutawney Phil saw his shadow today which ‘might’ mean we will have six more weeks of winter. The problem is that we really haven’t had ‘winter’ yet. Not complainin’, just sayin’. But winter is coming tomorrow for a couple of days. The temp tomorrow night will be below zero. Add the wind chill factor to that and it equals COLD. But by Sunday, we will once again have days in the 40’s and night’s in the 30’s.

I had a delightful day getting almost nothing done and I enjoyed every minute of it. I did not get in my car today. Shadow and I just enjoyed a day at home walking, playing, and doing nothing. I thought I was going to have another day of nothingness tomorrow after a 9 am meeting, but it looks like I will be driving to Boston to pick my friend Olga up after shoulder surgery. She was supposed to come home today, but she is not recovering as fast as the doctor would like, so he had her stay another day. The friend who was going to pick her up today cannot do it tomorrow, so she took me up on my offer. It is possible the doctor will keep her another day, but unlikely. So I am on standby and will hopefully get her home tomorrow.

This log is dedicated to my sister Patsy and her best friend from her teenage years and beyond. 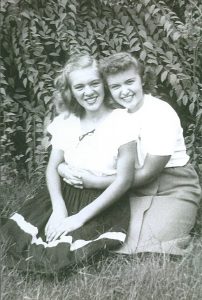 I am Facebook friends with the granddaughter of my sister’s best friend and tonight I saw a post announcing the death of that best friend, Helen Marie Landers Stricklen. In 1950, when I was two, my sister was 16, and Helen was 15, Patsy went with Bob Stricklen and Helen from West Virginia to Kentucky where they could be married legally. 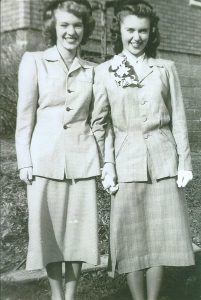 Patsy was their witness and she said tonight that everyone thought that marriage would not last because Helen was too young. Well, that marriage did last and when I was growing up, Helen and Bob were neighbors. I got to see firsthand what a truly happy marriage looks like. They had two daughters, Kathy and Becky who were the ages of my nieces and nephews. Since all of my brothers and sisters were close in age to Helen and Bob, I saw them as just another brother and sister and Kathy and Becky as nieces–an extension of my family. Helen gave me my first paying job when I was in third grade. I used to iron for her at 5 cents a piece. But what Helen and Bob gave me that has lasted through the years was a glimpse of what true happiness looks like. Bob died in 2021 after 71 years of marriage to Helen, and now Helen has joined him. When I called my sister tonight to tell her of Helen’s passing, she said, “Helen was the closest to being an angel that any human can be.” I only have two photos of Helen and Patsy, one as teenage girls and one taken on Helen and Bob’s wedding day. I was a very lucky person to have known both Helen and Bob. My thoughts are with the family left behind who knew them as Nanny and PaPa.

« Older Entries
Welcome to The Voyage of Windbird . . . and Beyond. My name is Judy Handley and I live on Cape Cod in Massachusetts. For six years of my life, my husband Mark and I sailed around the world. I documented that story, one day at a time, in this blog that was then just called The Voyage of Windbird. Those daily logs from 2005 to 2011 tell the story of our circumnavigation.